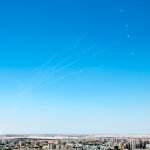 Iron Dome is a defensive system of Israel. This system works through radars which detect the launching of enemy’s missile and, within a few seconds, it calculates the  spot where it is expected to hit and sirens begin to wail so that the dwellers of that place may seek refuge in anti-aircraft shelters, the so called bunkers. Another missile is simultaneously launched to intercept the enemy’s rocket, destroying it while it is still in the air. In case the calculations show that the missile will fall in a desert place and it will not cause damage to the dwellers, the anti-missile is not activated.

In Psalm 91,God’s Word says that when we have our dwelling in the Lord, our refuge, we hide in God, no evil gets near our tent (v. 9-10). It means when we are in holiness, hidden in God, in prayer, asking for revelation, the Holy Spirit begins to show us what Satan is planning, the missiles he is launching against us, and then the same as in Israel’s defensive system, we pray, so we act beforehand and prevent the missiles from falling in our lives or, in case they fall, the damages will be at minimum, for we shall be under a protection.

The same as Israel’s defense which, in order not to fail, due to the high cost of the system, does not activate its anti-missile against all launched rockets, we ought not to be concerned about all things that are happening, about all things that are sounding surrounding us, with all its attacks. Otherwise we end up getting to spiritual bankruptcy. So that it will not happen, we should be hidden in God, praying and ‘shooting’ according to the Holy Spirit’s guidance.

Following this divine revelation, the Presidency of Restoration Ministry, altogether with the Directive Board and the Council of Administration, has established a new campaign / crusade for the month of June, called as Iron Dome.

June is the month for us to form a great dome over our lives, an iron dome over our church. We invite you to form this great system which will shelter all of our people!

June is a month of victory, it is a month for us to destroy all the attacks of the enemy, of neutralizing Satan’s attacks. June is the month of consolidation of attained victories. Shall we continue in this battle!

Check the schedule of this campaign below :